I have spent quite a bit of brain and kitchen power trying to come up with a decent Asian style sauce. One that could be drizzled onto phô or could be added to a stir fry and actually stick to the noodles. A sauce that stood up against a hoisin or oyster sauce. Thick and rich, not too sweet and not too salty.

I wanted to call it "Sauce of Wonder", but thought that was a buit pretentious so I enlisted my husband's help to name it. He suggested translating it to Vietnamese - nước sốt kỳ diệu. Not really a name that will come easily to most, and not really easy to search for. I translated it back to English and it is "Magic Sauce". I kind of like that. It has a nicer ring to it that "Hoisin Substitute". Plus it has been a while since I've had hoisin and this may be nothing like it. 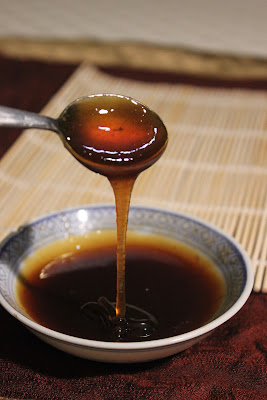 
** If you don't have carob syrup then you could substitute something else. I haven't tried, but I think that half a teaspoon of carob powder mixed with two teaspoons of boiling water would have a similar result or the same amount of instant decaf coffee might too.
Posted by Trishy at 23:02