Visitors. They give me an opportunity to try something other than standard meals. To take a bit more time and make something fancier. I experiment on visitors. Mostly it goes well. Today went exceptionally well.

We always have nibblies with these guests and a main meal and dessert. We spend a lot of time eating, drinking and being merry. The sun was shining today and sunny winter days are the best for sitting out under our pergola. It's always far too hot in summer. So we enjoyed a lovely roast lamb lunch with lots of vegies and after a bit of bocce and some baseball we sat in the dimming light with hot drinks and a frangipane tart.

How can you have a failsafe frangipane tart?

Well that is what makes this recipe interesting. I suppose you could substitute cashew meal, but that is an awful lot of cashew and would contain too many amines. I chose to substitute quinoa flakes. I had read somewhere on the internet that some ingenious person had used them to make nut free french macaron. I tried that too and they worked pretty well, so why wouldn't they work for this tart?

Quinoa is not usually a flavour you expect in desserts and the first mouthful caught me a little off guard, but after that I was amazed at how good it tasted. The texture was pretty close to the real thing and my guests said they would not have known that it wasn't the real thing if I hadn't told them so.

For the tart shell I used the same recipe that I have used for everything so far (I'm sure I'll try a different recipe one day, but I had some in the freezer, so today was not that day) 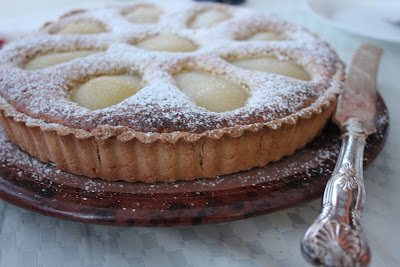 
This was lovely by itself, but if you were inclined to make it, then a dairy free custard would go nicely. Or, if you are the dairy eating kind of person, a blob of whipped cream would also go down a treat.