Australia is made up of so many different cultures all with wonderful food traditions. So many different flavours and cooking methods. Me? I come from a long line of Brits and am only second generation Australian. This means childhood meals weren't full of spices or unconventional meats or vegetables. For a while I felt a little miffed that I had no ability to eat chilli and that the smell of certain cured meats made me want to gag. It has paid off in the end because I seem to have a fairly sound knowledge of failsafe friendly food.

One set of grandparents were from Scotland and we used to eat with them quite a lot so it wasn't always fancy. The thing that my Nanna used to make quite often was Mince and Tatties a very traditional scottish meal. It is a savoury mince stew which is cheap and filling and is one of my comfort foods. My Nan would use gravox or vegemite to add a kick of flavour to the gravy and there was always peas and carrots in it. My version probably bears very little resemblance to hers or a traditional one, but it hits the spot. 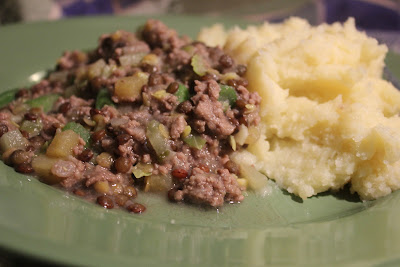 Variations
Salicylates - Use onions instead of leeks and add diced carrots.
Glutamates - Use green peas.

Leftovers are particularly nice on toast for an easy meal or thickened a bit more and used as a pie filler.
Posted by Trishy at 11:51