We recently came home from a holiday and got caught up in a lot of stuff that was happening, then suddenly realised that it was less than two weeks until our daughter's third birthday. Talk about a massive rush job party! Her party was on a much smaller scale than her older brother's was, partly because she is only three and partly because she doesn't have anywhere near as many friends as he did at that age.

Being three, she loves Charlie and Lola, so after a bit of messing around we settled on that as our theme, which is actually quite easy as it is all a mish-mash of colours and patterns. If we had planned it in advance we could have found a whole bunch of merchandise online for parties, but most of it would had to have come from overseas and there just wasn't enough time. So after a bit of searching online I came up with a colour theme and bought some of the items. 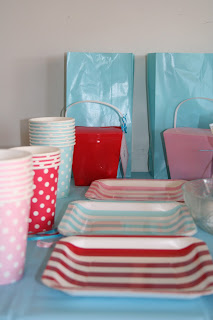 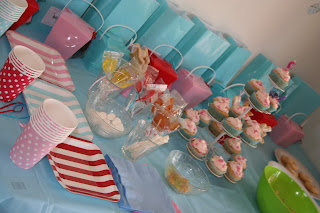 The food was a little different this time around. My daughter is not really failsafe, but almost becomes so by default since most of the food in our house is failsafe. Nor is she gluten or dairy free, but I wasn't going to make different food for everyone, and if we go to a party elsewhere my son has to eat different to every one else, so I figure that at home he should be able to have the same as everyone else. We also had a friend with an egg allergy, so I needed to make sure the majority of the food was egg free.

On the menu was fairy bread - too easy - I asked my friend to bring it as she wanted to help out. Bakers delight bread with nuttelex and some natural sprinkles. She also made some sandwiches. I pulled a couple of slices of gluten free bread out of the freezer for my son so he had some fairy bread and jam sandwiches.

There were also some doughnuts made with "egg replacer" instead of egg. I had plans of icing them, but ran out of time so just tossed them in caster sugar.

I made biscuits on sticks (these contained egg) and using the same dough I made some jam fancies. They were made by rolling the dough out thinner, using a scalloped round cutter to cut rounds, and then using a smaller round cutter to cut holes in half of them. Bake them and then spread jam on the ones without holes, and then top with the holey ones.

I opened a packet of Orgran shortbread hearts and dusted them with a bit of icing sugar.

Using the same dough as my melting moments I made checker board cookies and honey comb biscuits. The honey comb ones just have smashed up failsafe honey comb mixed through the dough. I rolled it into a log and put into the freezer until firm, then sliced and baked it. For the checker board cookies I divided the dough in half and mixed a tablespoon of carob into a portion of the dough. Roll both portions to approximately 5mm thick and roughly rectangular (or press/roll it into a slice tin to get the shape). Cut it into thirds lengthways and stack on top of each other in alternating colours. Put back into the freezer until firm again. Slice lengthways about 5mm thick and stack again in alternating colours. Freeze again, then slice crossways and bake (this sounds a bit more fiddly than it really is).

To nibble on, we also had failsafe chips, some homemade lollipops, white musk sticks and marshmallows.

The hot food was meatballs and chicken fingers. I used egg replacer and psyllium to make sure my meatballs stuck together and added less vegetables that I usually would. I used a cornflour slurry (with a bit of egg replacer mixed in for "insurance" - I had no time for stuff ups) to stick the crumbs to the chicken and added crushed garlic to it for flavour. 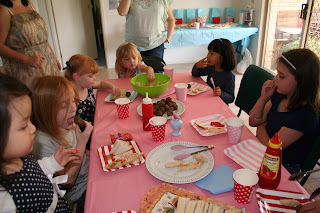 The cake was also a last minute decision and kids always love cupcakes and there is far less chance of them failing than with a big cake. I searched around for a recipe that I liked and that would adapt quite easily. I found one that I liked the idea of, but it needed a little bit of adapting. The cakes worked well without egg or dairy, but I had recently been experimenting with flour blending and the resulting flavour was not the best. I'm not sure quinoa flour is right for a mildly flavoured cake, it just overpowered it. So just stick to the flour that is suggested in the original or use a pre-blended pack like Orgran. The other thing that I found is that the sprinkles didn't really make much difference in the cake. I'm sure the bigger artificial ones would work better, but they are completely out of the question from a failsafe perspective.


The cake was served with pink milk, another Lola favourite.  Vanilla flavoured milk with enough cochineal to make it pink (rice milk for my boy, dairy for the others). The kids don't even notice that the pink milk isn't strawberry flavoured, it is sweet and pink and that is all that matters.

Organised fun was kept to a minimum since the birthday girl was only three and didn't really care. There was a game of pass the parcel and we set up a colouring-in table with Charlie and Lola printables and butcher's paper covering the table.

Party boxes consisted of a small amount of failsafe lollies and a large amount of pencils, crayons, mini gel pens, mini highlighters, little erasers, colouring in sheets and curly straws all purchased at a cheap shop.

Even though it was a rainy day and everyone was stuck inside (and my poor time management skills meant that I was still cooking when people walked int the door) we all had a great day.
Posted by Trishy at 22:29