For a long time we've been wanting to take our boy to see a band. A real rocking band.

Music was his obsession when he was small. He lived and breathed it. When he was two he could listen to a piece of music and tell the difference between a trumpet, saxophone and trombone or between a cymbal, triangle and tambourine. He watched Rage almost religiously and played his drums day and night. We took him to see friends play when he was much smaller, but as he got older it became more difficult. He couldn't sit still at all, he actually hated being confined to a room with groups of people and couldn't bear the noise. He would end up having what I would describe as a panic attack. He would freak out and beg to leave or cry or have a tantrum. He so desperately wanted the music, but couldn't stand being there. The occasions when we went to a gig and he stayed with grandparents, we wouldn't tell him where we were going as he would be devastated to not be able to go. We just couldn't pay whatever it cost us and have to leave before it even started.

He is six now, nearly seven. He can no longer do the trick of picking instruments in music and his drums are dusty, his head is now full of so many other things from school or books or games or sports. But he still has some musical passions. One of them is the Foo Fighters.

He discovered them all on his own watching Rage around about the time he turned four. He was in awe. He loved the song Everlong and would watch and listen to it over and over again. His most prized possession for quite a while was a little scrap of paper that he got his Dad to write all the band members names on and what instruments they played. He carried that bit of paper with him everywhere for months. At preschool he would 'play' Foo Fighters, which entailed him getting the other kids to act out the Everlong film clip with him. We took him to see Back and Forth, the band documentary and he has most of the albums.

It has taken us a really long time to discover his food intolerances and all the ways things affect him and we finally have him at a point where we thought he could deal with a gig. Thanks to his limited diet and a lot of fricking hard work, he is far less likely to panic and look for an out in crowds and his noise tolerance is way better.

We bought tickets for the three of us to see the Foo Fighters. The gig was last night at the Sydney Football Stadium with 47,000 people. Just a bit of a crowd.


We bought ear plugs for him to help with the noise, we prepped him for a while on what to expect and let him know that although he hates it, people will cheer and scream and clap and sing along. He said he would do none of those things. He doesn't clap for anything. He is painfully self conscious and a quite shy.

So last night we saw four bands completely rock out a stadium and our boy loved it. He REALLY loved it. When he saw his favourite band ever he stood on his seat and sang and cheered and clapped and reveled in the whole experience. He got tired, but didn't whinge, just sat down for a few minutes and then started again. 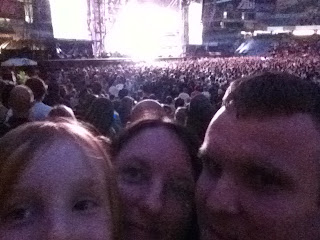 I am so grateful for discovering what was causing his problems and that because of that we got to have an amazing night out with our boy doing the things we love. Instead of being freaked by the crowd, he was liberated by it. He could dance and sing and hoot without fear that someone was watching him or that he stood out. No one was, they were all watching the band and everyone was getting into it.

Yes, his 'diet' is hard work and sometimes we throw our hands up in the air and despair and wonder why we do it all. Last night was the reason I do it all. That smile makes everything worth it.