Now You've Made All This Food, Go and Give Them Something Better to Do

I suppose one way around food issues at a party is to take the emphasis away from the food. A great way of doing this is by playing games. They don't have to be involved or tricky to play, in fact I've now discovered that the simple games are the best.

We stuck with the circus/carnival theme with the games and set up a 'can toss',  'clowns' and old fashioned 'pin the tail on the donkey'. We also had a face painter. Not exactly failsafe, but it was fun for the kids. My son doesn't have sensitive skin, but he didn't end up having it on for very long. We also made a photo booth for everyone to play in and a piñata to smash.


The can toss was the easiest to organise. Collect your old cans, set them up on a table, find some tennis balls and let them go for it. Noisiest, craziest fun. By the end of the party the cans were rather squashed. I really thought the kids would have one turn at each game, but it was all they wanted to do. It helped that they won tickets for playing and those tickets were redeemable for prizes after the cake. I had allowed for two prizes per kid and had to let them know that no matter how many tickets they won there would be no extra prizes. They just didn't care!

Pin the tail on the donkey cost about sixty cents at the local packaging and party supplies wholesaler. I'm still amazed how at how much kids today still love the games we played as kids. 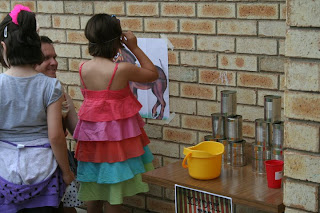 What is a side show without laughing clowns? Well my version involved an image found on google cropped, enlarged and printed on A3 paper at my husbands office, then stuck on a flattened nappy box, the mouths cut out and then propped onto a backyard toy. The kids had to try to throw juggling balls that we had made through the holes to get tickets.


So, what do you put in a failsafe piñata? Lots of cheap little toys. Noise makers, spinning tops, clown noses, little pinball games etc, and lots of lollies. Lollipops, werthers, milky bars. I kept buying things thinking that I would not have enough to fill the piñata, but it turned out that I had way too much and stood nearby with a bag full of stuff to throw on the ground when they broke the thing. 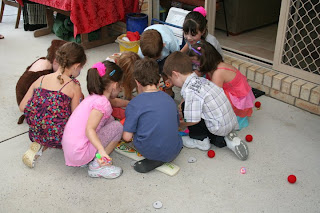 The photo booth was a massive cardboard box that one of the kids christmas presents came in. We opened it up so that it was wider and didn't have a front, stuck it all together with packing tape and then covered the inside with black wrapping paper and some red crushed velvet that I bought on sale. We sat the box up on two kiddy chairs and had some accessories on the side. Clown noses, plastic bowler hats and moustaches on sticks. This was both fun for the kids and the grown ups. 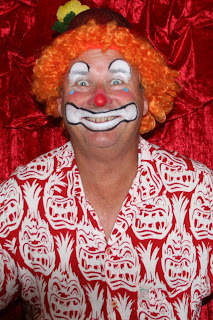 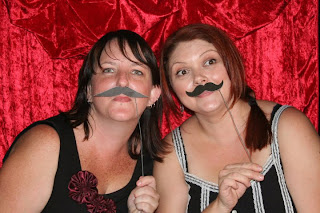 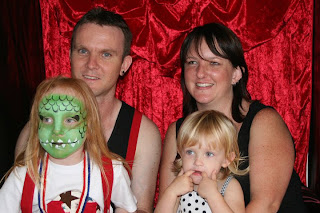 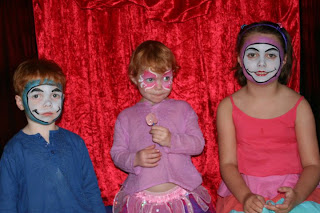 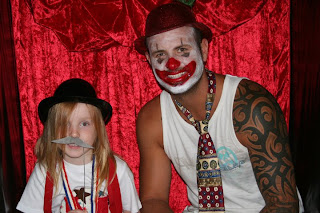 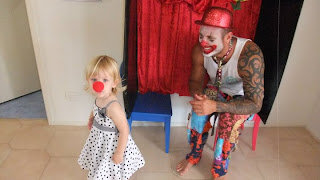 I found the templates for the moustaches on Martha Stewart, cut them from thick black cardboard and used thick wire for the handles.


The prizes were a load of toys that I found at Big W for a dollar each. There were water pistols, bubble wands, light up yo-yos, frisbees, skipping ropes and binoculars. The kids could not wait to redeem their tickets at the prize booth!

With a little planning you can really make the party not about food. Less food, more fun!