The Main Meal and Cake

So there was some food that got devoured at the party and some that did not. The only thing that didn't really get eaten by the kids was dinner. Not because it wasn't good, but because they were having too much fun to sit down. No matter how appealing the red clothed tables were and the little boxes of food, there were games to be played and anything that couldn't be eaten while playing didn't get eaten.

The main meal was chicken nuggets and chips. The nuggets can be made in advance and kept in the freezer until you need them. I made a lot as I made sure that there was food for the grown ups to eat too. So I didn't spend a day crumbing chicken, a couple of times over the two weeks leading up to the party, I bought some chicken then cut, crumbed and froze it. Put it in an air tight container with baking paper in between layers so they are easy to separate.

Chicken Nuggets
Cut enough chicken in to strips or chunks
Toss in corn starch
Dip in egg lightly beaten with a few teaspoons of water (If you don't want to use egg, blend the cornflour with water and dip the chicken into that then the crumbs)
Coat in rice crumbs (I like Casalare white rice crumbs)
Freeze until needed.
Then bake at 180℃ for approx 20 mins or panfry on medium heat until golden and cooked through or deep fry at 180℃ for approx 5 mins (depending on thickness).
The frying methods make it nice and golden, the oven does not. It depends on how much you are trying to cook which method you can use.

If you can't find those crumbs use your usual ones, or if you like get some gluten free puffed rice and blitz it in a food processor or put it in a bag and crush them with a rolling pin.

Chips
If you like you can chop up potatoes, stop them going black and then double fry them to yummy crispness... Or you can be like me and take the easy route with something and buy frozen ones. I used homebrand (Woolworths) crinkle cut chips. They are pretty good for a frozen chip and they are failsafe. The adults marveled over the crinkle cut which they had forgotten existed, it was like a flashback.
They can be cooked in the oven or a deep fryer. 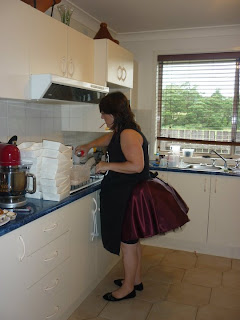 I did the nuggets in the oven and the chips in the deep fryer. I borrowed another fryer so that I could cook more at the one time. I had bought little cardboard take away boxes to put it in. I had grander plans of red and white striped hot dog trays, but I couldn't quite justify the expense on top of everything else.

The cake was devoured. Completely. Four dozen patty cakes, gone. Not bad for a gluten free, dairy free cake. The recipe is brilliant, I've since made it egg and soy free too and a friend used the recipe with normal flour and milk and still had great results. It's so very versatile and I found it on a great little blog.

This is my adaptation of it


Ingredients:
My frosting varies from the original because I wasn't sure that kids would care for caramelised butter frosting and I wasn't sure nuttelex would caramelise, then there is the cream. So I just made a basic butter cream with golden syrup added.
It comes down to personal taste how heavy you like your icing or how much you want on your cakes, if you want to spread it or pipe it. I made mine reasonably thick and piped it. If you want it softer add more nuttelex or a dash of milk or water until you get the consistency you want. If you like mountains of it on cakes you might need to make more.


Once I had the icing on them, I very lightly sprinkled them with natural sprinkles. This is totally optional and not at all necessary. The other thing I put on them, which really seemed to excite the kids, was mini pinwheels bought from the same packaging and party wholesaler that I bought a tonne of other stuff from.

Thus ends the party saga. There are sure to be more party related posts at a later date, but I'm going to try to post about some normal food next.