The saga continues... The cupcakes which were made were a big cheat - yes, it is okay to cut corners where you can. These are the Macro brand vanilla cupcake mix which are, except for excessive vanilla, failsafe. Plus I knew they worked with egg replacer for our allergic guest. Two batches of these were made in different sized and coloured papers and with a few different coloured frostings (Hoppers natural colours) to give the illusion of more variety. You could also add some carob powder or golden syrup to some of them to give flavour variety without having to make separate batches of cake. They were also used as a party favour. 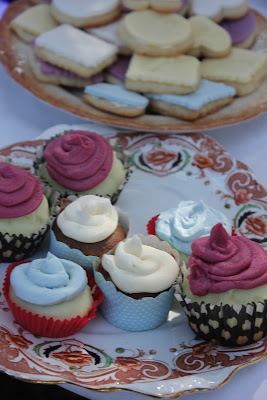 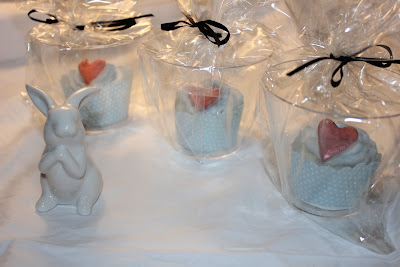 The cakes for taking home were placed in plastic tumblers which were bought from a cheap shop and then put into cellophane bags and tied with a ribbon.

There was also fairy bread with natural sprinkles - some was gluten free and some made with Baker's Delight bread. My friend brought the gluten-filled type and used cookie cutters to achieve the teapot and teacup shapes.

There were also gluten free bread-and-butterflies; these were made using my bread recipe that was sliced, spread with nuttelex and then cut with butterfly cookie cutters. 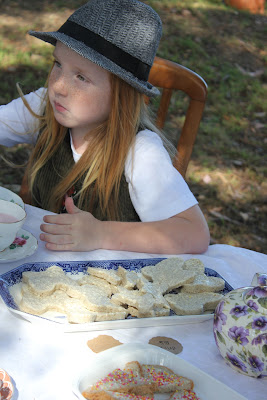 Pink milk was served as the main drink - a sugar syrup made from two cups of sugar and 2 cups of boiling water was made with vanilla essence and cochineal added. This was mixed into both rice milk and dairy milk and put into teapots on the table. You tend to need a bit more cochineal than you think and as it is diluted again into the milk.

The lolly table had most of the usual failsafe lollies, plus a few that I had made. 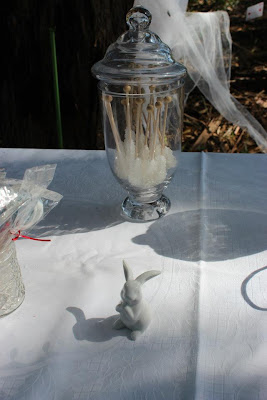 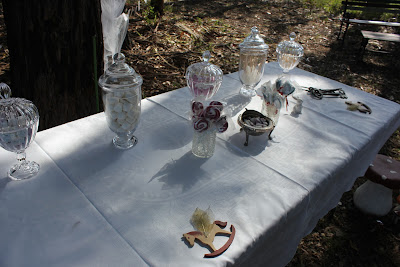 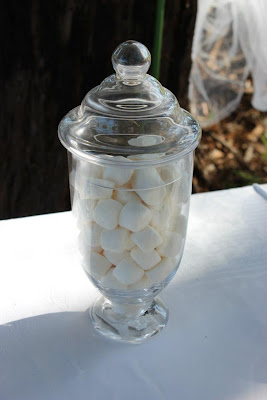 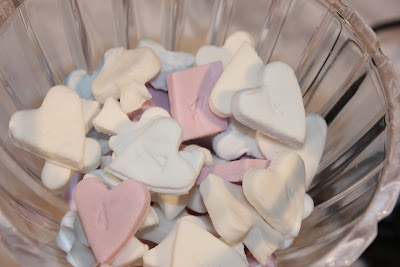 The last picture was a recipe I found for conversation hearts (does anyone remember these?). The recipe needed tweaking and in my rush I didn't measure or write anything down. So, unfortunately, a recipe for that will have to wait.

Activities were kept minimal. The kids played croquet and had a great time doing so. I had planned to have a caucus race, but the ground was uneven ad covered with lots of sticks, so I abandoned the idea as I didn't want any injuries. I tried to think of a way to paint roses red without getting paint on party clothes too. They could have coloured with pencils, but in the end they had too much fun playing amongst the trees, eating party food and playing croquet. 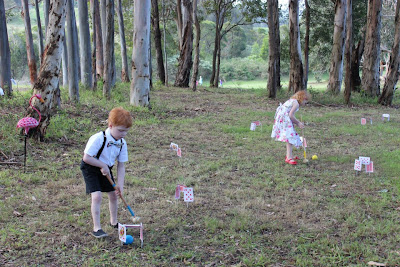 There were party favours other than the cakes. I chose to keep these non-food items. There had been plenty of lollies and sweets consumed at the party, so I felt that the the kids  didn't really need to take more home. We had a variety of different Alice in Wonderland books that the kids received depending on their age. The older children got a paperback version of the stories, the younger ones got a few different colouring books, and the older boys who I knew would not be into these at all got a pack of jumbo playing cards. They also all got a bubble wand (I mean who doesn't like bubbles).

I'll put the cake in it's very own post, in order to make it easier to find.
Posted by Trishy at 23:26