These are something that I make a lot. It seems that most recipes call for egg yolks and the only recipe that wants the white bits is meringue. I asked my mum if she had any other ideas what I could do with them, she suggested an egg white omlette and the thought of that makes me want to puke. Taking all the nice flavour and texture the yolk adds and leaving you with something resembling rubber. No thanks. So I keep on making meringue. And since I regularly make mayonnaise, I regularly have egg whites, so I regularly make meringues too.

This is a simple recipe, two ingredients, that is it. It bothers me that the commercial ones can contain so many ingredients. 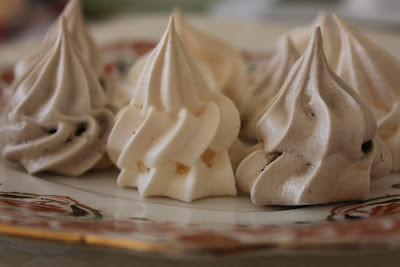 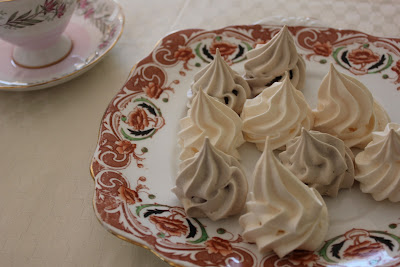 Variations: Make them large and flat to use for a pavlova.
Add 1-2 teaspoons of sifted carob just before piping for variety.
Add a small quantity of vanilla seeds before piping for flavour.
Sprinkle uncooked meringues with natural sprinkles for a special occasion.
Dairy/soy - After they are cooked and cooled dip the tips in melted white chocolate or carob.

These make great afternoon tea treats or are lovely for a party.
Posted by Trishy at 23:43