I've never made any pretenses about my organisational skills. In fact I quite regularly go on about my extreme lack of them. So, I had a little heart attack when my co-contributors to "At the Failsafe Table" decided to have a Christmas edition this week. It's a truly great idea and I'm sure you would all like to be a bit prepared and maybe even have a trial run of what you would like to make. For me this week is last minute birthday party preparation for my daughter's 4th birthday - Christmas is not even on my radar until next week.

I have managed to fit something in this week though, so this year you get a Christmas recipe from me before Christmas instead of in March.

While I was deciding what to make I was thinking about all the different yummy foods that are usually eaten over the holidays and one of the things that came into my mind was those rolled pieces of pork that are stuffed with fruit and nuts and are sweet and moist with that naughty bit of crackling on the top. I have done a failsafe version of that. "How is that even possible?" you say. "Massive substitutions" I say; that and a bit of imagination. 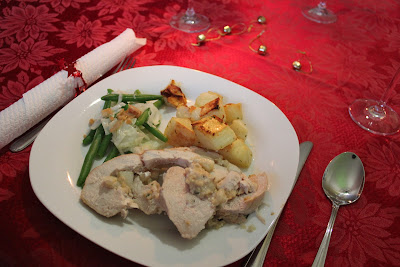 
We all enjoyed this, it really did remind me of the pork ones. Hubby said he would like to have more stuffing. It would be nice, but it would also make it trickier to roll.

So spring is here and nearly gone. I have been wanting to share this one for a while, but have had some really good recipes that I had to add first.

We celebrate a few extra holidays in our house. You may remember the pumpkin pie from our autumn feast or have seen pictures of our yule feast on my Facebook page. We celebrate the standard ones too, but really enjoy having the old school seasonal celebrations. They fit with the weather, with fresh food available at the time. 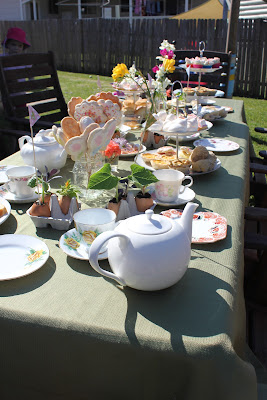 On the 22nd September it was the spring equinox, so we had our Ostara party. Or I guess you could call it easter or Eostre. So you get the theme - flowers, bunnies, eggs, butterflies - Spring things. And what better way to do it than a garden tea party. The table was set with all my china along with glass jars and cups with fresh flowers (these were the rather smelly kind, if you're smell sensitive use ones that are low fragrance). 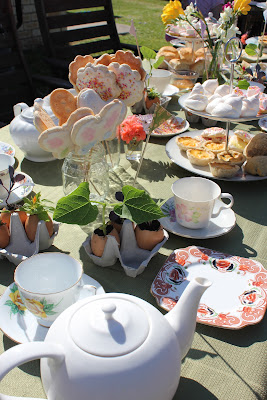 No new recipes for this party, just reshaping some that I already have.

Flower and butterfly shaped biscuit wands made to the iced biscuit recipe or the gum free recipe.  These were decorated with white icing and natural sprinkles and coloured sugar. This is so basic to do, but something I forgot about for a long time. You know exactly what you are getting with these, and if you use homemade colours they can be completely failsafe.

Also made using the coloured sugar were rice crispy eggs. To shape them I use little plastic eggs, the kind you would normally put treats inside for Easter.

If you wanted to do these as something the  Easter bunny has left you can coat inside half the egg with the sugar and leave them in the egg to make it less messy.

My friend made vanilla cupcakes that had a split marshmallow on top to look like a flower and tea cup biscuits which were an Orgran thistle shortbread biscuit topped with a marshmallow, sprinkles and half a lifesaver (not failsafe, but similar could be made from royal icing) all stuck together with royal icing.


Meringues were piped in the shape of peeps or little chicks. I tried adding a bit of saffron to them for colour, but the little that I used gave no real colour, but drastically changed the flavour... not something I would do again. You could also add little dots of icing or carob to make eyes. 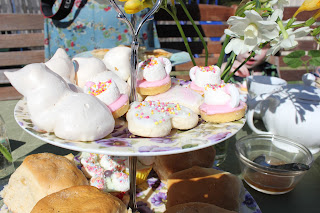 There were also scones & jam, little chicken & mayonnaise wraps, mini quiches and pink vanilla milk (rice milk for mine, cow milk for the others) in teapots for the kids to drink.


The activities were loads of fun, the kids made birdfeeders by sticking birdseed to toilet rolls using flour  and water glue and took them home to hang in the garden.

My friend brought blank animal masks and the children decorated them with glitter, sequins, pompoms and textas.


The grand finale was an egg hunt in the yard for plastic eggs with treats.

They all took home seedlings to plant; a bean, a purple cabbage and a decorative one. A great non-food idea for easter too, just make sure your seedlings are right for the season. 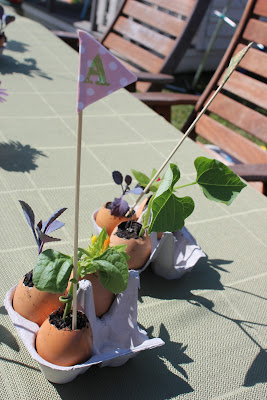 Now to prepare for the Summer Solstice!