Too Much of a Good Thing?

My son like crêpes. He really likes crêpes. I'm could probably fill one with brussel sprouts and he'd gobble it up. Well, maybe that's going a bit too far. He likes them for breakfast the most. His favourite thing to have on them are 'lemon' juice and sugar. I find this a little boring and have made a really lovely filling that would work for breakfast or dessert and there are a few more things you could do for non-failsafe family members or guests who join you for brunch.

We had these crêpes on the weekend just gone. It was the long weekend, so theoretically we had unlimited time to spend making breakfast. Batter was made, batter was resting, filling was gently simmering on the stove, I started to cook the crêpes and suddenly everything stopped. We had run out of gas! That has never happened before. We are not connected to town gas, but have two enormous cylinders that are solely for the cook top. They do nothing else and last forever. We have been here nearly six years and have only needed one replaced in all that time. But alas, we were out of gas.

Out comes the trusty old electric frypan that I haven't used in years and almost threw away recently. Thank goodness I didn't because we won't have gas until Wednesday. It took ages to cook the crêpes one at a time on that thing and the filling was finished off in the microwave.

This is the same basic crêpe recipe that I have posted previously.

Method
Stack on a plate (you could put baking paper between them to make sure they don't stick, although mine didn't stick together) and cover with foil until they are all done. They can be frozen with paper between them.


I had previously made this filling on Fathers Day, just so there was something else that my boy could eat, and it was just so good. The smell alone is drool worthy. 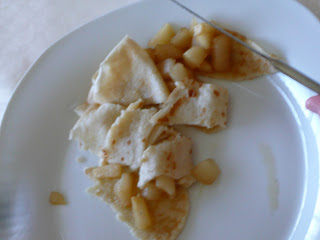 Variations
Have 'lemon' juice and sugar or just pure maple syrup or golden syrup.
Salicylates - Add a small piece of cinnamon stick to the pot. Or fill with fresh strawberries and maple syrup.
Dairy - Serve with big dollops of whipped cream or ice cream
Amines - Place some broken up good quality dark chocolate on half of the crêpe while it is still in the pan. When the chocolate starts to melt fold crêpe into quarters and serve. I have incredibly fond memories of eating crêpes au chocolat noir while wandering around Paris at midnight.

If you are having visitors you could put all the different fillings into bowls on the table and let everyone help themselves.

Or in english "I say, that is a lot of garlic!"

This is another french dish which I absolutely love and my son loves it too. There is so much garlic, but after being roasted it is all soft and sweet and just delicious. You can serve it with your favourite bread or with mash and veg to make a big meal out it. My son is currently challenging gluten, so I made an unbelievably good spelt baguette to go with it which I will post soon. It is a really simple meal to make and great for when you are having guests because you can just put it in the oven and not do anything else until it it is done.

Once again this recipe is adapted from a french cook book that I own.

Chicken with 40 Cloves of Garlic 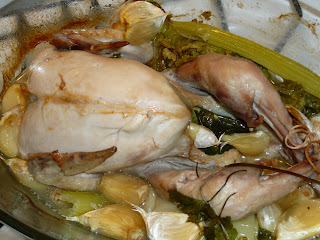 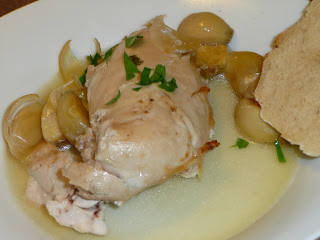 Variations
Amines - leave the skin on the chicken.
Salicylates - Add 4 sprigs of thyme, 2 of rosemary and a roughly chopped carrot to the pot.
You could also use chicken pieces instead of a whole chicken (for example if you only like breast or if you can't be bothered to cut up a whole one). Cooking time will come down to 45mins - 1hour depending on the size of the pieces.

The best things in life are free...

... Free of gluten, free of dairy and free of all those nasty chemicals that make life in this house not fun.

This pie is free of all those things and it's so good that your guests won't even know it.

Without further ado I give you the gluten free, dairy free, soy free, lemon free-

This is an amalgamation of several recipes that I adapted and put together for this.
The pastry is the same that I used for the pear tart. I will put it here again, though, to save you having to go look for it.

The Filling
This makes a thin layer of lemon filling, approximately 1cm deep. If you like more it is fairly simple to increase the quantity by thirds.


The Meringue
If you like lots and lots of meringue then by all means make more.

Now put it all together

If you want mini pies, use little tart tins. Unless you are making loads of them you will probably only need a third of the filling mixture. Excess pastry can be frozen and used at a later date. Just remove from the freezer and that at room temperature before trying to roll.